A traditional print editor approached me about writing a children's fantasy. I said I would consider it. She was about to be away from the office for a couple of weeks, but would contact me again when she returned. Meanwhile, I got to work on the children's novel, which turned out to be this one: a boy with idle time in the mall while his mother shops explores its central park and finds a path leading beyond the statue of Pandora, the girl who let everything out of the box. He follows it and discovers a magic land. Well, now. He chances on a scooter, the kind you push with your foot, that always coasts downhill, regardless of the direction it's going. I have exactly such a scooter, by no coincidence, minus that appealing magic. I use it to scoot out three quarters of a mile to fetch in our morning newspapers. We live on a tree farm and have a long drive through the forest. He finds a girl about his own age, who turns out to be from China; she found a different path into the park. So this is more than just a local phenomenon. It goes on from there. So what of the editor who asked for this? I never heard from her again. Editors can be like ghosts, fading out without notice after causing authors to waste time. Meanwhile, a teacher read the novel to her classes of that age, and they liked it. It was vetted to remove anything an adult might think was unfit for a child to read, such as a boy calling a female unicorn a horny nag. So it's not as spicy as it was, but should still be fun reading. Naturally the child-vetted novel did not find a publisher, while my other recent children's novel, Tortoise Reform, not vetted, did. Is it any wonder writers become cynical? If you remove anything that might annoy somebody somewhere, you can wind up with tasteless mush. But I think any child would enjoy such a park, and maybe in some big mall there's a path, if you can just find it.
Posted by PDP at 10:00 PM 12 comments: 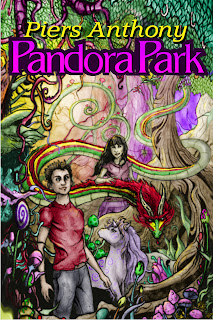 In Albany, New York, Mark hates getting dumped at the mall park while his mom shops. It’s so embarrassing! But Mark quickly changes his mind after he discovers a mysterious path leading to a magical forest.

In Bejing, China, Kelsie finds a similar path, and somehow, she meets Mark in the same magical world!

Now the two friends must work together to unravel the origins of Pandora Park. This wild adventure crosses the globe and is packed with magical powers, dragons, talking unicorns, candy trees, on a roller coaster ride that never stops!


Follow this Link to Purchase Your Copy Today
Posted by PDP at 9:18 AM No comments: 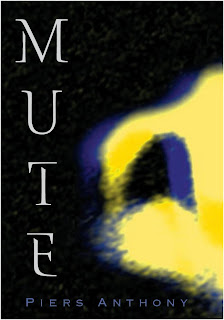 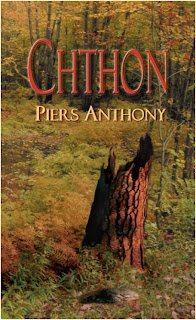 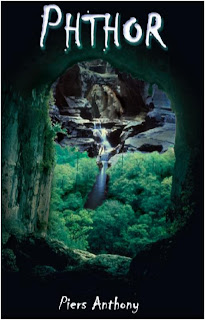 Phthor is the sequel to Chthon, less intricately structured and less complicated in plot, but still quite dark and ugly in theme and detail. Rather than flashbacks and flashforwards, it has a Y outline, with the stem the initial story and the ends alternate futures, neither of which is acceptable to Aton’s son Arlo. Arlo has his own encounter with a Minionette, and naturally destruction is upon him and all with whom he associates. Write/editor Charles Platt was so impressed with the chthonic setting that he wrote two additional sequels, Plasm and Soma, which are even darker and grimmer.
Posted by PDP at 10:11 AM 7 comments:

Beauty
There is a blessing I remember from my youth: “May you have the love of a beautiful woman.” I presume that is mainly for men, while women would be blessed with the love of handsome men. I can see the appeal; good looking folk are a universal turn-on. We see them constantly on TV and in the movies, because average viewers pay more attention to attractive people than they do to homely people. Especially men of any age with respect to young women. I'm the same; a pretty and shapely young woman commands my immediate attention. We are hard-wired to notice. But as I go shopping at the grocery store I see real women, and they range from ordinary to gross, mostly because of obesity. As a general rule, the older she is, the heavier she is. Some have to ride around in the powered carts the store provides, being too fat to make the rounds afoot. And I wonder: do none of them have the discipline to restrain their appetite and keep their weight in a healthy range? Very few, it seems. Yes, men fatten too, but not as much, and in any event men generally don't make their marks by their appearance, but by their accomplishments, so it's less important for them.
This plays out in other ways. Yes, it would be nice to have the love of a beautiful woman, and many of my stories involve ordinary men who encounter lovely woman. I write that way because I want to sell copies, and pretty women sell more than homely ones. It's the same phenomenon as the TV ads and programs populated by lovely folk. Sometimes I will have an ordinary woman who encounters a handsome man. Somebody has to be attractive, if a writer wants many readers. Readers may claim that other story values count, and they do, but other things being equal, pretty people count more. There was a nice study done a few years back, wherein it was found that in second marriages, the wealthier the man was, the less his wife weighed. Obviously what counts for the man is her appearance; what counts for the woman is his money. Should you ask a portly elder man and his slender wife about that, I suspect they will angrily deny it, but statistically it is true.
But there's another aspect. Why is it such a blessing to possess a physically beautiful woman? Why not a smart woman, or a rich woman, or a really nice woman? Yes, one woman could be all these things together, and she would be a treasure. But the blessing doesn't specify anything but beauty, and I'm pretty sure it means appearance rather than character. I suppose the equivalent blessing for a woman would be to have the love of a rich man, as seen above. But isn't it a sad commentary on our culture, indeed on our species, that this one quality, out of the myriad qualities women possess, should be the one that defines her worth? I am disgusted, but I still look at beautiful women.
Posted by PDP at 9:10 AM 5 comments: